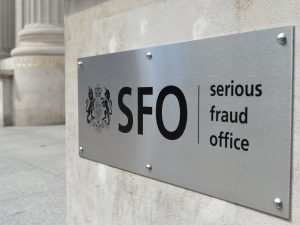 An SFO investigation into allegations of bribery and corruption in relation to contracts secured by Sarclad Ltd resulted in a Deferred Prosecution Agreement between the SFO and the company and the prosecution of three individuals, who were acquitted in July 2019.  The DPA with the company expired following the conclusion of the prosecution.

The SFO investigation was initiated in 2013. Sarclad Ltd, a steel industry product design and manufacturing company, had identified issues in the way in which a number of contracts had been secured in August 2012 and hired a law firm to advise them. The subsequent report by the company lawyers was delivered to the SFO on 31 January 2013, after which the SFO opened its own investigation.

This resulted in a DPA with the company on 6 July 2016.  Sarclad accepted the charges of corruption and failure to prevent bribery in relation to the systematic use of bribes to secure contracts for the company between June 2004 and June 2012. The contracts that were the subject of the DPA had a total value of over £17m

It also resulted in the charging of three individuals in 2016 with conspiring with various agents to agree bribes in relation to 27 overseas contracts. The company was anonymised at the time the DPA was announced in accordance with reporting restrictions, to protect the individuals’ right to a fair trial.

On 16 July 2019, Michael Sorby, Adrian Leek and David Justice were acquitted of the charges. After the removal of reporting restrictions, the SFO confirmed that these acquittals follow the Deferred Prosecution Agreement reached between the SFO and Sarclad Ltd.

As a result of the DPA, Sarclad agreed to pay financial orders of £6,553,085, comprised of a £6,201,085 disgorgement of gross profits and a £352,000 financial penalty. £1,953,085 was paid by Sarclad’s US registered parent company as repayment of a significant proportion of the dividends that it received from the company over the indictment period.

The DPA also required Sarclad to fully cooperate with the SFO and to provide a report addressing all third party intermediary transactions, and the completion and effectiveness of its existing anti-bribery and corruption controls, every twelve months for the duration of the DPA. The terms of the DPA were met and the DPA concluded on 16 July 2019.  Details of how the company complied with the terms of the DPA are here.