Statement from the Director

I present the Annual Report for the Serious Fraud Office for the reporting year 2019-20. The end of this reporting period comes midway through my second year as Director of the SFO and just as the March COVID-19 lockdown begins to ease. Over the past 12 months, the SFO has continued to fulfil its mission as an influential and world class organisation that is tackling serious economic crime.

The structural and operational changes I have instigated and overseen over the past year are helping to shape the SFO into the organisation I envisioned when I began my role as Director in August 2018. On another note, our response to the uncertainty and upheaval that followed the outbreak of COVID-19, has been efficient and effective as we have adjusted our processes and approach to meet our operational needs and the obstacles faced by our staff and partners across the globe. Throughout this period, I have witnessed unrivalled resilience and professionalism, despite the challenges. It has been inspiring and we emerge a better and stronger organisation.

Over the year, I have been well supported by my top management team, as well the new Attorney General and her predecessor, in instituting my vision for the SFO. We have continued to deliver
strong operational results during the year, obtaining successful convictions or other judicial resolutions, such as Deferred Prosecution Agreements (DPAs).

We have charged six individuals and opened five new criminal investigations. In January 2020, we secured a DPA with Airbus SE in which the company agreed to pay a fine and costs amounting
to €991m in the UK and €3.6bn in total. This DPA is the world’s largest ever global resolution of bribery and corruption charges. It could not have been reached without the unified dedication
and commitment of our colleagues in France and the United States. The SFO also reached DPAs during 2019 with Güralp Systems Ltd and Serco Geographix. In 2019-20 our Proceeds of Crime
Division secured over £13m in new financial orders made against criminals convicted in SFO cases, with payments received against previous orders totalling over £7m.

The year has also presented challenges and some high profile acquittals followed investigations begun earlier. We are charged with applying the Code for Crown Prosecutors in each case and bringing before the jury the best available evidence. While the SFO’s charging decisions in those cases has attracted some criticism, I am convinced that the organisation has fulfilled its duty in pursuing the matters that have been prosecuted.

The SFO investigates and prosecutes some of the most complex crime brought before the criminal courts in England and Wales and we are prepared to face the challenges that come with that responsibility. In all our casework, the witnesses and victims of crime are our priority. Her Majesty’s Crown Prosecution Inspectorate (HMCPSI) recognised this commitment explicitly in its 2019 report on Case Progression, which noted that our work in this area exhibited the highest standards of care. Our Proceeds of Crime Division secured confiscation orders of over £434,000 against individuals convicted in the Solar Energy Savings Ltd case. All of this money will be paid as compensation to the victims in this case. Over the past year we have increased transparency
regarding our work and have sought independent review of both our corporate and casework practices. As part of this effort (and as noted above), HMCPSI reviewed how we progress our
cases and I invited the Inspectorate also to review the SFO’s leadership and staff engagement. We have incorporated the findings from both reviews into our ongoing work to improve our ability to
fulfil our remit as effectively as possible in a fast changing and increasingly technical world.

We have also promoted better corporate governance: specifically, we have published guidance that outlines what good co-operation looks like; and we have developed internal guidance to assist
our case teams in evaluating the effectiveness of compliance programmes. Our most recent DPAs reflect our development in this area.

Co-operation with other criminal justice agencies is essential for the SFO as nearly all of our cases involve working with partners—both domestic and international; we have dedicated significant
resources to solidifying these relationships at operational and strategic levels. The resolution in the Airbus case demonstrates our ability to cement strong international ties and unified co-operation. Even in cases that do not deliver record-breaking results, we prioritise strengthening our partnerships and exploring opportunities to tackle transnational economic crime in a coordinated and collaborative way. From a domestic perspective, we have continued to develop our already significant role within the National Economic Crime Centre (NECC) (as our investigation of the London Capital and Finance matter demonstrates). We continue to join forces with our law enforcement colleagues on casework and intelligence matters, in line
with the Government’s strategy for tackling serious economic crime. It is only by enhancing these relationships, as well as those within other Government departments, that we will collectively
succeed in protecting the UK’s economy and tackling the serious economic crime that undermines our prosperity. In conclusion, the SFO is well placed to continue our fight against top-tier complex economic crime and to fulfilling our core mission of investigating and prosecuting the most serious such matters in the UK and abroad. 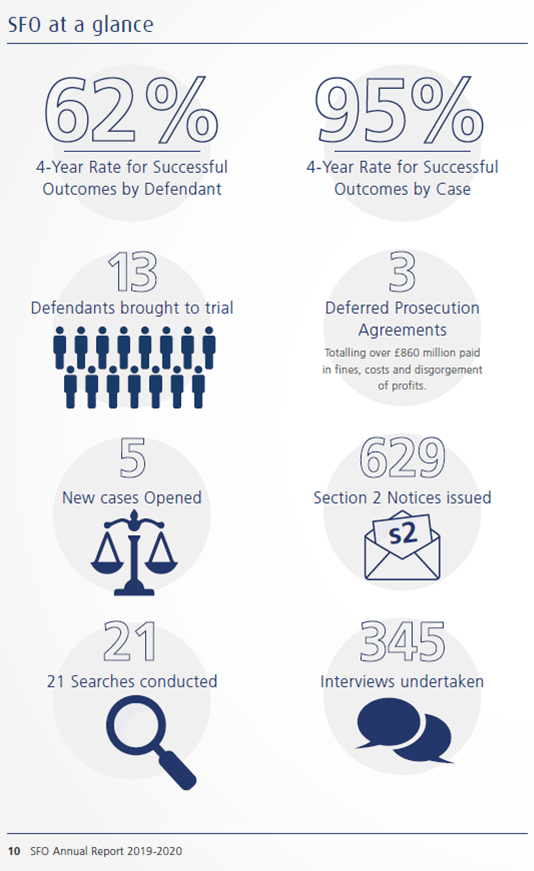