The SFO is set to recover millions lost in a corruption case which saw Griffiths Energy bribe Chadian diplomats in the United States and Canada.

‘Chad Oil’ was a vehicle used by senior diplomats at the Chadian Embassy to the United States to facilitate a deal which saw the wife of the former Deputy Chief, Mrs Ikram Saleh purchase 800,000 shares at less than 0.001$CAD each, later selling them for significant profit.

Griffiths later self-reported these and other transactions as bribes intended to illegally secure commercial interests in Chad and pleaded guilty to corruption charges brought by the Canadian authorities.

Following the takeover by Griffiths Energy by a UK corporation and share sale via a UK broker, the corrupt proceeds entered the UK’s jurisdiction and the SFO began civil recovery proceedings to secure the £4.4m share sale profits from Ikram Saleh.

The matter was brought to a three-day trial at the High Court which today granted the SFO’s order to the value of £4.4m, the first time money has been returned overseas in a civil recovery case.

“Today’s ruling follows four years of tireless efforts by the SFO to recover the proceeds of this corrupt deal for oil in Chad.

“This is a positive result in the ongoing fight against criminals who attempt to hide their ill-gotten gains in our jurisdiction.”

The recovered money will be transferred to the Department for International Development (DFID) who will identify key projects to invest in that will benefit the poorest in Chad.

“The UK Government has a zero tolerance approach to corruption and today’s landmark judgment means this money can be used to help the people of Chad.

“DFID is already working in Chad, investing in humanitarian programmes and supporting safety nets to tackle poverty. We will now be working on the details of how these recovered funds can best help one of the poorest countries in the world.”

This follows two SFO landmark cases where funds recovered in bribery and corruption prosecutions were returned and reinvested in the country. When senior executives at Smith & Ouzman were convicted of foreign bribery in 2016, the SFO’s confiscation order paid for seven new ambulances in Kenya, while the Deferred Prosecution Agreement against Standard Bank involved payment of £4.9m to the Government of Tanzania. 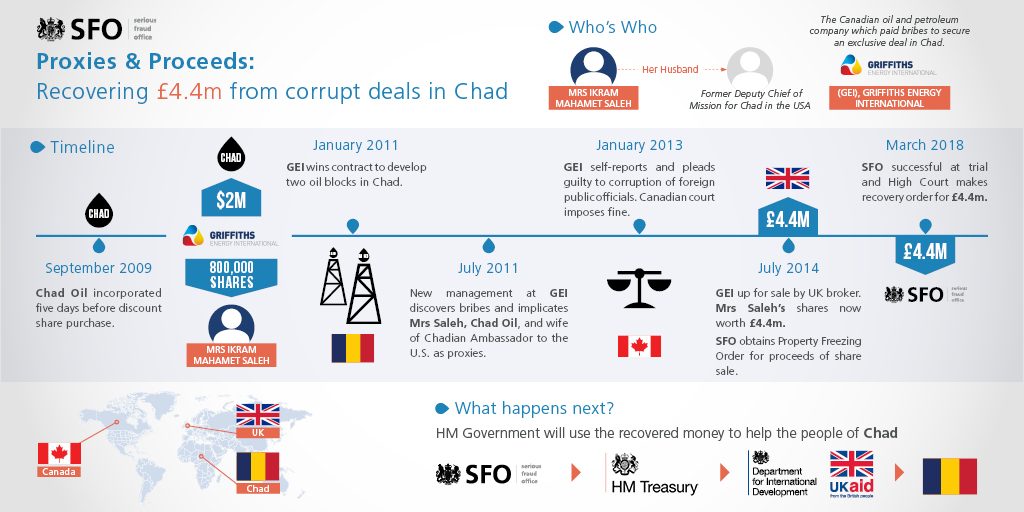